Join Me and Other MOREistas This Saturday at MORE Brunch

REMINDER FOR SAT. at 11:30AM to join us for brunch and meet the MOREistas growing corps of members.

Here's a good sign with this message just in: MORE is looking for a space for our general meetings as we have outgrown the space we have been using.

But we will have to pay for this space. So for $20 you get a good meal, (and I think MORE may be a tax free deal now) and good company.

Do I have to tell you if you are a NYC teacher that the only way to have a chance to turn the tide of ed deform is to capture leadership of the UFT/AFT. Now that may be a long march I may not live to see but the first step is building a viable democratically run alternative with a MORE rep in as many schools as possible. Let me emphasize "democratic." If we could win power by being like Unity I would say "no thank you."

Been reluctant to attend a MORE meeting because you are all meeting out? Here is you chance to rub elbows - and noses if you prefer - with an entire gaggle of MOREistas in this fund raiser. As you know, we are not e4e getting money from Bill Gates. Or the UFT with its $200 million budget.

And we have a great new project -- MORE Stuff in Your Mailbox -- a new newspaper being distributed to schools all over the city (you can sign up as a distributor for your school at the MORE website -- and I'll hand deliver them to you -- if you treat me to a school lunch). Yes, Virginia, we have to pay to print those suckers and you can help by attending this lunch -- and if you can't come support it anyway.

Sean Ahern, a master chef and cooking teacher, has been heading the project. Sean was one of the first people who contacted me in 2002/3 when I went citywide with Ed Notes and we quickly became good friends. He was one of the key people in helping form ICE and has jumped into the work of MORE with enthusiasm.

When I met Sean, he was in the early stages of his 3rd career - teaching. He began as a transit worker, inspecting tracks. Walking over an icy bridge he decided it was time to switch careers and he became a chef, working with Eli Zabar and others. Then he went on to offer his services and skills to the kids of the New York City school system, as needed a service in vocational training as can be found.

Not only will you be helping MORE but you will get a great meal as Sean is joined by another cooking teacher, Michael Lynch. And you also will get a chance to meet the great new generation of activists working with MORE like Julie Cavanagh, Rosie Frascella, Mike Schirtzer, and a slew of others -- yes I will be playing the part of grandpa.

The closest subway stop is Washington/Clinton on the C line. Or go to the Barclay Center on Atlantic Ave and walk about 10 minutes. 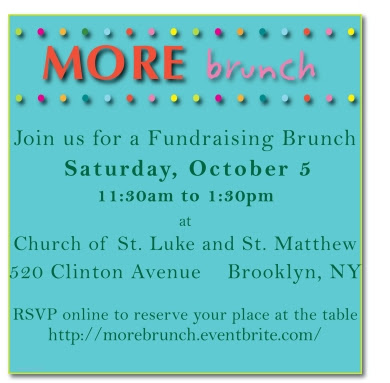 Two experienced NYC chef/educators, Michael Lynch and Sean Ahern will be preparing a delicious and affordable Brunch (vegetarian and vegan options included) all homemade and from  the highest quality ingredients and professionally prepared.  We have trained many of NYC most talented students who are now working in some of the top restaurants in the city.
The proceeds will go to help the Movement of Rank and File Educators with its organizing efforts in the coming year.  Teacher singer songwriters of note, Fred Arcoleo and Patrick Walsh will entertain you. MORE’s Presidential Candidate Julie Cavanagh and other leaders will be in attendance.  A great morning awaits you.  Invite co workers, friends and family for a relaxing and enjoyable saturday brunch.  Its a fun crowd.
Make your reservation today:
http://morebrunch.eventbrite.com/