Julio for UFT President, Bernice and Penny Lane for UFT Secretary and Treasurer 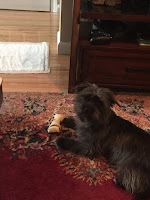 A lot of people are expressing doubt about the upcoming UFT election. Should I vote for Mulgrew? Should I vote for MORE? They haven't even proposed a candidate, and who can sit around waiting for something like that? It's always tough to make important decisions like those. That's why it's so important for us to have another alternative, someone who isn't sociopathic or megalomaniacal, somene who isn't making backdoor deals, someone who not only won't punch your face out for opposing Common Core, but also someone who wouldn't remotely consider opposing Opt-out... I wasn't going to make an endorsement so early, but I know the field, and I think it's time we broaden it. We need a leader who won't sell us out for political expedience. We need a leader who we can count on and trust. We need a leader who won't take any crap from the likes of Cuomo, Flanagan, or whatever tinhorn politician comes down the pike.

While I'm not happy that NYC Educator endorsed his dog Julio for UFT president rather than opening things up to a democratic process where a cat would have a chance, I will defer even though I am pissed I hadn't thought of throwing one of my cats into the ring first. It makes prefect sense to me given that I consider UFT elections a basic farce and have been urging people to boycott. But now that we have as viable a candidate as I've seen I have to rethink my position. I'm adding Bernice and Penny Lane to the Julio slate for UFT officer positions.

Lauren Cohen Emmie's candidacy has been in the works for awhile