Memo from the RTC: I Give Up March Madness for Tenors and Have more fun 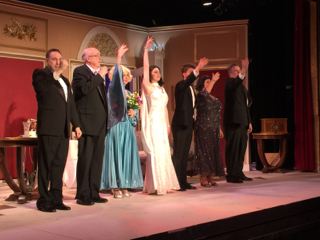 Memo from the RTC:  I Give Up March Madness for Tenors and Have more fun 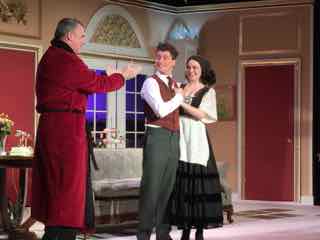 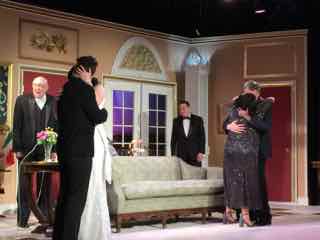 I missed one of my rare opening nights of the Rockaway Theatre Company’s production of  “A Comedy of Tenors” (see my School Scope column for why) but received texts later that night about how funny and well-done it was. I wanted to see the show before this column was due on
Monday and had to make a choice on Sunday: watch the Auburn/Kentucky basketball game or go to the matinee on a nasty rainy day. The night before I watched one of the best college games I’ve seen in the Virginia/Purdue game and was tempted. But thinking of all you WAVE readers chomping at the bit waiting for my views of the play, I picked up my video camera and dragged myself over to the theater on a dreary afternoon expecting a light crowd, but instead finding a packed theater and an enthusiastic audience that got every funny line. And the chaos on the stage more than matched even the most frenetic of Sweet 16 basketball games. I had to muffle my laughter to keep it off the video. I’m going back Saturday to see it again.

For those of you who don’t know the outline of the play, let me repeat the summary from my column a few weeks ago:

One hotel suite, four tenors, two wives, three girlfriends, and a soccer stadium filled with screaming fans. What could possibly go wrong? It’s 1930s Paris and the stage is set for the concert of the century – as long as producer Henry Saunders can keep Italian superstar Tito Merelli and his hot-blooded wife, Maira, from causing runaway chaos. Prepare for an uproarious ride, full of mistaken identities, bedroom hijinks, and madcap delight.
… Samuel French web site, “A Comedy of Tenors”

Pulling this mayhem off requires the superb direction of Peggy Page and Michael Wotypka and perfect timing from a perfect cast, mostly RTC vets, each of whom deserves a column of their own.

Robert Wilkinson, a NYC high school teacher, fresh off his performance as the heavy duty lead in last fall’s “A View from the Bridge” shows his versatility as he goes from heavy drama to this comic performance in which he plays two roles. What a tour de force. Lynda Browning, who can do anything on the stage, as the wife, tosses one line after another – and oh, those reactions. Jodee Timpone takes on the sexy role of Racon with verve and sexy vigor. (To think of it, Jody has been doing a number of these type of roles.) In View from the Bridge she played Robert’s wife and now she plays his lover. We have to keep an eye on these two. Cliff Hesse, who does just about everything at the RTC, has a major role as Saunders and gets the funniest lines that he nails with on the button regularity. David Risley as Max delivers his always reliable performance – and while acting in this play, he is also rehearsing his cast for the next show, Doubt, which is opening in two months. And what can we say about the gorgeous young couple, Adele Wendt and Nathan Reder? Well, I’m out of words so you’ll have to wait ‘till next week to read all about them.