E4E Gets Another $3 million from Gates Foundation

They just got $3M more from Gates

Great news for NYC teachers. Now you can invite E4E to buy your school lunch and order caviar. 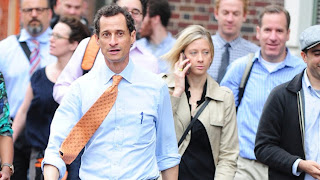 Back in the summer of 2009 I first met Barbara Morgan at a rally at PS 123 in Harlem protesting the Eva invasion. She introduced herself claiming she was an ed notes reader. She was working at the NYCDOE for Joel Klein chief flack David Cantor. At one point I offered her (and David) jobs representing Ed Notes so they could get the sleaze of repping for Klein off (or most of it.)

After repping Klein, Chris Cerf, and Corrie Booker, Barbara just might have been better off at Ed Notes. (I pay in cookies.)

She was my favorite Tweedie, always friendly and calm no matter how heated things became. She was at so many meetings that I videotaped you'd think she was really on my staff. I loved how the numerous Klein flacks twitted around at meetings massaging the ed press (except me) -- and how massage-able they seemed to be. Barbara was one of the best masseuses.

Now she is all over the local and national news. Oy!

She went ballistic -- not it seems over the internal stuff the intern leaked – but over the attack on her for having a thin resume. Klein, Booker, Cerf, Weiner  -- maybe not thin but certainly slimy.

Of course, Barbara is a PR person and her own PR is the most important thing, so the attack on her by the intern cut deepest. But some commented that she was doing a great job in a very difficult situation. Now she may be toast, not just as Weiner's press chief but her career will take a serious hit. But not to worry. Barbara has backers in high places. My suggestion: she use them to get her a job teaching 3rd grade in the South Bronx.

I'm thinking of tweeting her a pic of my junk.

I'm pretty sure she won't be upset.

Principal From Hell Jennifer Rogers: Parents Call for Her Ouster at Press Conf Aug. 1, 11AM 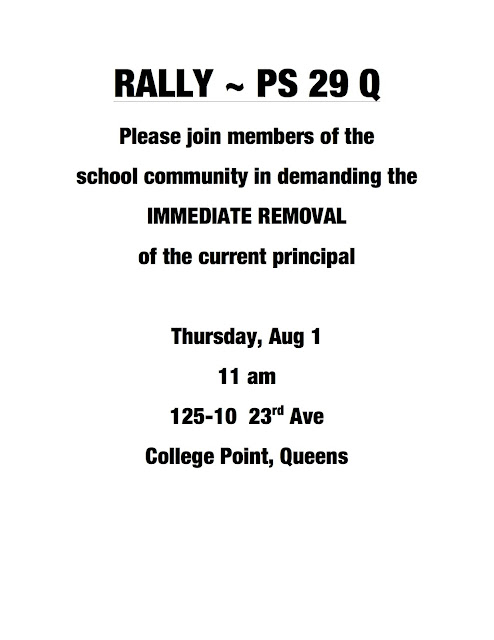 What Next From FOX? Challenging a Jew for Daring to Write About Jesus?

“You’re a Muslim, so why did you write a book about the founder of Christianity?” Ms. Green asked..... FOX News

readers of a fundamentalist/Evangelical persuasion are furious that a Muslim published a book about Christianity’s origins.”... NY Times

Today's NY Times business section has an interesting article, which in the context of my spending the past month reading Jeremy Scahill's "Dirty Wars" makes some interesting connections run through my brain.

I heard a fascinating hour long interview with Reza Aslan on NPR last week about Jesus the man. Aslan pointed out that Jesus the man was never a God and in fact, coming from a poor working class family, was probably fairly lowbrow and in fact a Jewish fundamentalist radical, which is the way he died. Not a Christian, but one of a long line of Jewish radicals like Marx. Trotsky, et al. Not that he actually said that, but it is great to see fundamentalists -- be they Christian, Jew or Muslim, sweat.

Reza Aslan, the author of “Zealot,” a provocative new biography of Jesus, has found an inadvertent ally in generating book publicity: Fox News.
In an interview on Friday that was by turns bizarre and uncomfortable, Lauren Green, a host from “Spirited Debate,” a weekly Fox News webcast, pressed Mr. Aslan on the question of why, as a Muslim, he would choose Jesus as his subject.
“You’re a Muslim, so why did you write a book about the founder of Christianity?” Ms. Green asked.
“Well, to be clear,” Mr. Aslan said, his eyebrows lifting up in surprise, “I am a scholar of religions with four degrees, including one in the New Testament, and fluency in biblical Greek, who has been studying the origins of Christianity for two decades, who also just happens to be a Muslim.”
The nearly 10-minute video clip quickly entered the Internet bloodstream on Saturday after it was posted on Buzzfeed with the irresistibly clickable headline, “Is This The Most Embarrassing Interview Fox News Has Ever Done?”
Since then, the Buzzfeed page featuring the video has been viewed nearly four million times. Mr. Aslan quickly amassed an additional 5,000 Twitter followers. On Monday, Random House, Mr. Aslan’s publisher, said the interview had clearly helped the book: in two days, sales increased 35 percent.
On Friday, “Zealot” was in the No. 8 spot on Amazon.com, the nation’s biggest seller of books; by Sunday, it had hit No. 1.
Random House is rushing to meet the surge in demand for the book. On Monday, the publisher ordered 50,000 copies, bringing the total to 150,000 copies in print by the end of the week.
An investigation of the historical Jesus, “Zealot” has been praised by many reviewers since its publication on July 16. In a review in Tablet magazine, Adam Kirsch called “Zealot” a “coherent and often convincing portrait of who Jesus was and what he wanted.”
But some conservative critics have suggested that the book is not a work of scholarship, but merely “an educated Muslim’s opinions about Jesus and the ancient Near East,” as John S. Dickerson, an opinion columnist, wrote on FoxNews.com last week.
The reaction to the book has spread to Mr. Aslan’s Amazon page: on The Atlantic Wire, Alexander Nazaryan pointed out that browsing through dozens of one-star reviews on Amazon revealed that “plenty of readers of what seems to be a fundamentalist/Evangelical persuasion are furious that a Muslim published a book about Christianity’s origins.”
The book was already selling steadily before the FoxNews.com interview on Friday. Since the release of “Zealot,” Mr. Aslan has hit the publicity circuit, discussing the book on “The Daily Show” on Comedy Central, “Morning Joe” on MSNBC and “Weekend Edition” on NPR. “Zealot” had its debut at No. 4 on the New York Times print hardcover best-seller list that will appear in print on Aug. 4.
In a telephone interview, Mr. Aslan said that in three weeks of his book tour, he had received an “overwhelmingly positive” response to his work, and that it was anything but an attack on Christianity.
“I hope that people recognize that your faith, as Jesus said, is supposed to be built on a rock, not on sand,” he said. “I guess my message is: Relax.”
Mr. Aslan was born in Iran, moved to the United States with his family as a child and later earned degrees from Santa Clara University, Harvard and the University of Iowa. He is an associate professor of creative writing at the University of California, Riverside.
Book Passage, a bookstore with two outlets in the Bay Area, hosted Mr. Aslan for a signing last week. Karen West, the director of events, said more than 250 people attended it. But the Fox News interview, she said, has exposed the book to consumers who aren’t regular book buyers.
“It’s moved now out of the NPR realm and it’s gotten into the broader culture,” she said.
A spokeswoman for Fox News did not respond to an e-mail seeking comment.
Mr. Aslan said that after reading Mr. Dickerson’s essay on FoxNews.com, he was prepared for a similar line of attack from Ms. Green.
He was so eager to promote the book on Fox News that his publisher tried — in vain — to secure an interview spot on “Fox & Friends,” a morning show.
“I’ll be perfectly honest — I’m thrilled at the response that people have had to the interview,” Mr. Aslan said. “You can’t buy this kind of publicity.”

After a closer look at Thompson's political record and associations, he is no less a crook and a hack than Quinn herself. And to be honest, I'm not so sure he isn't worse than Quinn. .... RBE


Councilman Jumaane Williams explained mayoral hopeful Bill Thompson‘s race relations speech by musing about his poll numbers among black voters. “I think he originally felt that certain segments of the population were going to go with him automatically. He started looking at polls and seeing that wasn’t happening,” he said. “Thompson’s trying to have it both ways without putting any skin in the game.”


Reality-Based Educator nails it. Remember how the UFT first endorsement in 2001 was one Alan Hevesi?

This is so good I am printing it and adding it to my sandwich for lunch.

With the Anthony Weiner poll plummet made official by yesterday's Quinnipiac poll release (Weiner dropped to fourth in the race; 53% of New Yorkers say he should drop out), I am starting to turn my attention back to the candidate whose policies I can live with who will be most effective at taking on Christine Quinn in a runoff.
The Marist poll from last week and yesterday's Quinnipiac poll release show us that the two candidates with a good chance to make the runoff against Quinn are Bill Thompson, the former NYC comptroller, and Bill de Blasio, the current Public Advocate.

Though many teachers I know favor Liu or even Sal Albanese, the default position will be Thompson or de Blasio, who I don't particularly love either. But if I were voting today that is where my vote would go. Just don't ask me what I think tomorrow.

The Little Theater That Could: Rockaway Cafe: The Comeback - Final perfomances this weekend