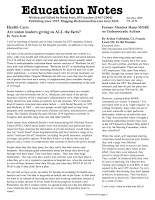 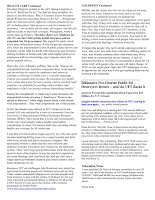 I am publishing this excerpt from Arthur's blog in the hard copy of Ed Notes which I distribute at Delegate Assemblies. I didn't agree with his entire blog post and will comment on those aspects in the future. But I agree totally with his analysis of MORE and myself was the victim of undemocratic acts when I was suspended for 6 months for daring to repeat something that happened at a MORE meeting. My suspension is supposedly over but I'm not going back to that hot mess.

I've been observing union and union leadership pretty closely for a few years now. No one's perfect, and there are flaws in every organization. There are some UFT employees I like more than others. MORE, though, has crossed lines in ways that go far beyond the pale. A group of us worked very hard to have our voices heard within the UFT. We planned and schemed, and then we put our plans and schemes into action. We won Ex. Bd. seats. This was remarkable.

However, a group within MORE considered our victory "a disaster." I've seen them refer to us as "right-wingers" in writing. Evidently, that's what you are if you don't subscribe to their particular philosophy, whatever on earth that may be. They were horrified when I brought a resolution supporting smaller class sizes to the UFT Executive Board. Why didn't I run it by the Steering Committee, which they controlled?

When this small, self-important steering committee found themselves term-limited, they took a page from Michael Bloomberg and tried to remove the limits. For whatever reason, they failed in that effort. Once they were replaced, they moved to dump all their replacements. They couldn't be bothered with their own by-laws or anything, did whatever they wanted, and managed to lose 80% of their support in the next UFT election. I'm very comfortable determining they don't appear to believe in democracy. They fractured opposition so decisively I determined it to be a waste of time.

I saw a real vision in what was left of MORE, and the vision was this--we do whatever we want, however we want, whenever we want, and if we lose elections by a landslide because we alienate the overwhelming majority of our former supporters, we're good with that. Hey, if they only want to mix with people who buy their particular brand of socialism, or whatever they call it, that's fine. But if you want to reach UFT members, if you want to organize and change things for working teachers, you need to be willing to talk to everyone. You need to be willing to have conversations with people who aren't limited to your particular ideology, whatever it may be.

I'd argue that people who can't tolerate opposing points of view, who won't mix with those who have differing points of view, who blindly condemn those with whom they likely have more in common than not are fanatics. A lack of tolerance like that is not likely to accomplish a whole lot. I'd rather work with people who can and will make change. In 2019, on this astral plane, that's the UFT leadership. In fact, as opposition, the only way I ever got anything done was by working with leadership.