The first edition of the new school year of Another View. Our aim is to bring deeper and more thoughtful discussion of issues to UFT members - to present a view you won't see coming from the leadership or other caucuses.

If you want to share with others in your schools and beyond email me for a pdf or copy and paste the text below and send it as an email. 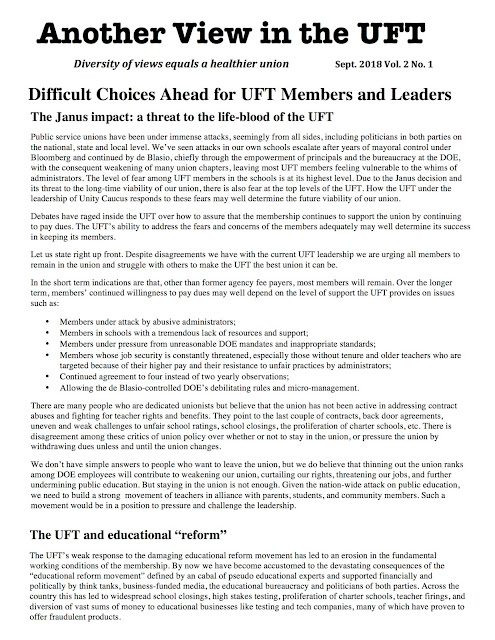 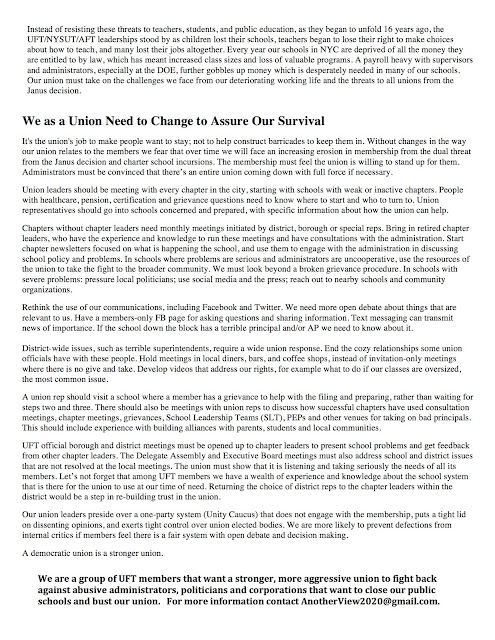 Difficult Choices Ahead for UFT Members and Leaders

The Janus impact: a threat to the life-blood of the UFT

Public service unions have been under immense attacks, seemingly from all sides, including politicians in both parties on the national, state and local level. We’ve seen attacks in our own schools escalate after years of mayoral control under Bloomberg and continued by de Blasio, chiefly through the empowerment of principals and the bureaucracy at the DOE, with the consequent weakening of many union chapters, leaving most UFT members feeling vulnerable to the whims of administrators. The level of fear among UFT members in the schools is at its highest level. Due to the Janus decision and its threat to the long-time viability of our union, there is also fear at the top levels of the UFT. How the UFT under the leadership of Unity Caucus responds to these fears may well determine the future viability of our union.

Debates have raged inside the UFT over how to assure that the membership continues to support the union by continuing to pay dues. The UFT’s ability to address the fears and concerns of the members adequately may well determine its success in keeping its members.

Let us state right up front. Despite disagreements we have with the current UFT leadership we are urging all members to remain in the union and struggle with others to make the UFT the best union it can be.

In the short term indications are that, other than former agency fee payers, most members will remain. Over the longer term, members’ continued willingness to pay dues may well depend on the level of support the UFT provides on issues such as:

There are many people who are dedicated unionists but believe that the union has not been active in addressing contract abuses and fighting for teacher rights and benefits. They point to the last couple of contracts, back door agreements, uneven and weak challenges to unfair school ratings, school closings, the proliferation of charter schools, etc. There is disagreement among these critics of union policy over whether or not to stay in the union, or pressure the union by withdrawing dues unless and until the union changes.

We don’t have simple answers to people who want to leave the union, but we do believe that thinning out the union ranks among DOE employees will contribute to weakening our union, curtailing our rights, threatening our jobs, and further undermining public education. But staying in the union is not enough. Given the nation-wide attack on public education, we need to build a strong  movement of teachers in alliance with parents, students, and community members. Such a movement would be in a position to pressure and challenge the leadership.

The UFT and educational “reform”

The UFT’s weak response to the damaging educational reform movement has led to an erosion in the fundamental working conditions of the membership. By now we have become accustomed to the devastating consequences of the “educational reform movement” defined by an cabal of pseudo educational experts and supported financially and politically by think tanks, business-funded media, the educational bureaucracy and politicians of both parties. Across the country this has led to widespread school closings, high stakes testing, proliferation of charter schools, teacher firings, and diversion of vast sums of money to educational businesses like testing and tech companies, many of which have proven to offer fraudulent products.

Instead of resisting these threats to teachers, students, and public education, as they began to unfold 16 years ago, the UFT/NYSUT/AFT leaderships stood by as children lost their schools, teachers began to lose their right to make choices about how to teach, and many lost their jobs altogether. Every year our schools in NYC are deprived of all the money they are entitled to by law, which has meant increased class sizes and loss of valuable programs. A payroll heavy with supervisors and administrators, especially at the DOE, further gobbles up money which is desperately needed in many of our schools. Our union must take on the challenges we face from our deteriorating working life and the threats to all unions from the Janus decision.

We as a Union Need to Change to Assure Our Survival

It's the union's job to make people want to stay; not to help construct barricades to keep them in. Without changes in the way our union relates to the members we fear that over time we will face an increasing erosion in membership from the dual threat from the Janus decision and charter school incursions. The membership must feel the union is willing to stand up for them. Administrators must be convinced that there’s an entire union coming down with full force if necessary.

Union leaders should be meeting with every chapter in the city, starting with schools with weak or inactive chapters. People with healthcare, pension, certification and grievance questions need to know where to start and who to turn to. Union representatives should go into schools concerned and prepared, with specific information about how the union can help.

Chapters without chapter leaders need monthly meetings initiated by district, borough or special reps. Bring in retired chapter leaders, who have the experience and knowledge to run these meetings and have consultations with the administration. Start chapter newsletters focused on what is happening the school, and use them to engage with the administration in discussing school policy and problems. In schools where problems are serious and administrators are uncooperative, use the resources of the union to take the fight to the broader community. We must look beyond a broken grievance procedure. In schools with severe problems: pressure local politicians; use social media and the press; reach out to nearby schools and community organizations.

Rethink the use of our communications, including Facebook and Twitter. We need more open debate about things that are relevant to us. Have a members-only FB page for asking questions and sharing information. Text messaging can transmit news of importance. If the school down the block has a terrible principal and/or AP we need to know about it.

District-wide issues, such as terrible superintendents, require a wide union response. End the cozy relationships some union officials have with these people. Hold meetings in local diners, bars, and coffee shops, instead of invitation-only meetings where there is no give and take. Develop videos that address our rights, for example what to do if our classes are oversized, the most common issue.

A union rep should visit a school where a member has a grievance to help with the filing and preparing, rather than waiting for steps two and three. There should also be meetings with union reps to discuss how successful chapters have used consultation meetings, chapter meetings, grievances, School Leadership Teams (SLT), PEPs and other venues for taking on bad principals. This should include experience with building alliances with parents, students and local communities.

UFT official borough and district meetings must be opened up to chapter leaders to present school problems and get feedback from other chapter leaders. The Delegate Assembly and Executive Board meetings must also address school and district issues that are not resolved at the local meetings. The union must show that it is listening and taking seriously the needs of all its members. Let’s not forget that among UFT members we have a wealth of experience and knowledge about the school system that is there for the union to use at our time of need. Returning the choice of district reps to the chapter leaders within the district would be a step in re-building trust in the union.

Our union leaders preside over a one-party system (Unity Caucus) that does not engage with the membership, puts a tight lid on dissenting opinions, and exerts tight control over union elected bodies. We are more likely to prevent defections from internal critics if members feel there is a fair system with open debate and decision making.

A democratic union is a stronger union.

We are a group of UFT members that want a stronger, more aggressive union to fight back against abusive administrators, politicians and corporations that want to close our public schools and bust our union.   For more information contact AnotherView2020@gmail.com.