Memo From the RTC: 9 to 5 The Musical – Democratizing the Workplace 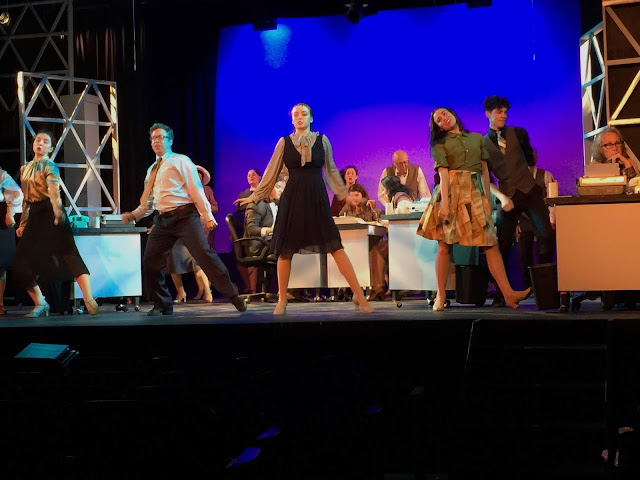 My other column in this week's WAVE.

Who knew how political 9 to 5 would be when they chose it a year ago in the context of today's metoo movement? I never saw the movie or the show before. Very powerful workplace and pro-feminist story.

The show runs though August 5.

If there are no tickets online, get in touch with me or show up about an hour before the show and there are always some available at the door. A big cast with some gorgeous people (I won't be sexist here) and wonderful dancers, a few who are out of the LaGuardia HS dance program a decade ago.


Memo From the RTC:   9 to 5 The Musical – Democratizing the Workplace
By Norm Scott

Don’t like how the boss is running the company? Here’s a simple solution: Have a group of secretaries kidnap him and run the place themselves. Anyone who has ever worked in an office environment knows that strong and competent secretaries really run the place. The great AMC “Mad Men” series demonstrated that. Office Manager Joan Harris played by Christina Hendricks was a force of nature.

We saw the same type of force of nature exhibited by the three leads as the Rockaway Theatre Company’s production of “9 to 5, the Musical” opened last Friday. Violet Newstead, a widow with a teenage son who is struggling to make ends meet and has been consistently denied advancement, has the respect and admiration of the entire office staff while she has to roll her eyes at the open sexism and dumb decisions coming out of the married boss who openly brags that he is having an affair with the married Doralee Rhodes. Everyone in the office knows about it, except Doralee, who can’t understand why everyone hates her. Newly divorced Judy Bernly arrives and Violet, feeling sorry for her, overlooks her lack of skills and covers up and offers to train her. Violet is seething over seeing the much less qualified man she was training get the promotion. Eventually things the boss’s behavior get so over the top, these three get together, exercise a hostile takeover and start running the office from behind the scenes.

I’m approaching my word limit and I only have space to talk about the three leads. There is no more powerful and thrilling voice than that of Luisa Boyaggi (Violet), who director Susan Corning had cast as Mama Rose in Gypsy a few years ago when Luisa was new to the RTC. What a find. And that girl can act up a storm too. When Luisa sings the birds stop what they are doing to listen.

We first noticed Courtney Sanello (Dorallee) when Susan cast her for a small role in “Little Shop of Horrors” a few years ago. Susan has a way of discovering talent, as since then Courtney has graduated from the William Esper Studio and a member of SAG-AFTRA (www.courtneysanello.com). She perfectly captures the Dolly Parton twang (not bad for a girl from Atlantic Beach) and plays the role of the sex bomb the boss lusts for perfectly.

Jessie Carina Lanza (Judy) is making her RTC debut and when she opened her mouth to sing I went “holy sh-t.” The Boise, ID native starts out as shy, fumbling, and somewhat inept. Then comes a fantasy scene where she comes out dressed as a bombshell. “Holy sh-t” twice over. We hope to be seeing a lot more of Jessie in future productions.

Jessie is sharing the role of Judy with the great RTC quadruple threat Catherine Leib, who is not only acting but co-directing and even doing costumes. Maybe quintuple threat. I’m looking forward to seeing her interpretation of the role in the next few weeks.

There’s so much more to say about the production but the editor is tugging at me to stop. More next week.

Directed by Susan Corning
Music and lyrics by Parton

Order tickets at www.rockawaytheatrecompany.org or https://www.brownpapertickets.com/event/3214996.