The article below I wrote will be a lead article in the Ed Notes I prepared for handout at today's Delegate Assembly. If you are going stop by and say hello and take a copy -- I am only printing about 300 so first come first serve. If you want a pdf to print them out in your school email me.

Also make sure to pick up the MORE Delegate Assembly newletter today which has articles by Jia Lee and James Eterno on the evaluation system plus articles on defending immigrant students and using the Trump presidency to mobilize progressive educators. 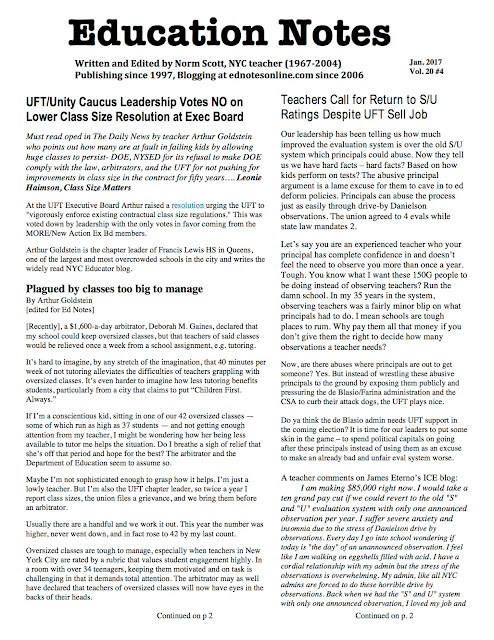 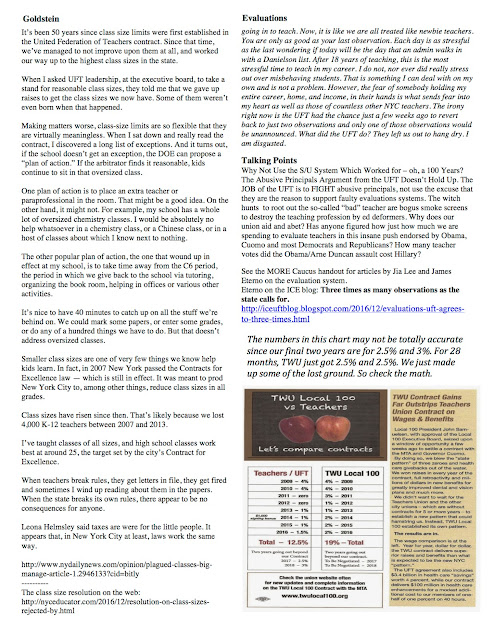 
Our leadership has been telling us how much improved the evaluation system is over the old S/U system which principals could abuse. Now they tell us we have hard facts – hard facts? Based on how kids perform on tests? The abusive principal argument is a lame excuse for them to cave in to ed deform policies. Principals can abuse the process just as easily through drive-by Danielson observations. The union agreed to 4 evals while state law mandates 2.

Let’s say you are an experienced teacher who your principal has complete confidence in and doesn’t feel the need to observe you more than once a year. Tough. You know what I want these 150G people to be doing instead of observing teachers? Run the damn school. In my 35 years in the system, observing teachers was a fairly minor blip on what principals had to do. I mean schools are tough places to rum. Why pay them all that money if you don’t give them the right to decide how many observations a teacher needs?

Now, are there abuses where principals are out to get someone? Yes. But instead of wrestling these abusive principals to the ground by exposing them publicly and pressuring the de Blasio/Farina administration and the CSA to curb their attack dogs, the UFT plays nice.

Do ya think the de Blasio admin needs UFT support in the coming election? It is time for our leaders to put some skin in the game – to spend political capitals on going after these principals instead of using them as an excuse to make an already bad and unfair eval system worse.


I am making $85,000 right now. I would take a ten grand pay cut if we could revert to the old "S" and "U" evaluation system with only one announced observation per year. I suffer severe anxiety and insomnia due to the stress of Danielson drive by observations. Every day I go into school wondering if today is "the day" of an unannounced observation. I feel like I am walking on eggshells filled with acid. I have a cordial relationship with my admin but the stress of the observations is overwhelming. My admin, like all NYC admins are forced to do these horrible drive by observations. Back when we had the "S" and U" system with only one announced observation, I loved my job and going in to teach. Now, it is like we are all treated like newbie teachers. You are only as good as your last observation. Each day is as stressful as the last wondering if today will be the day that an admin walks in with a Danielson list. After 18 years of teaching, this is the most stressful time to teach in my career. I do not, nor ever did really stress out over misbehaving students. That is something I can deal with on my own and is not a problem. However, the fear of somebody holding my entire career, home, and income, in their hands is what sends fear into my heart as well as those of countless other NYC teachers. The irony right now is the UFT had the chance just a few weeks ago to revert back to just two observations and only one of those observations would be unannounced. What did the UFT do? They left us out to hang dry. I am disgusted.

Talking Points
See the MORE Caucus handout for articles by Jia Lee and James Eterno on the evaluation system.

Eterno on the ICE blog: Three times as many observations as the state calls for.

Resolution on Class Sizes Rejected by UFT Executive Board.