[Addendum Nov.  21 - I watched the MORE people promoting this idea and getting people to sign for this democratic process - and many did - but since the idea is to get the union to support Bernie - which will never happen - why not just get UFTers on board who are for Bernie and promote a Bernie campaign inside the UFT because these halfway measures go nowhere other than when the reso is brought up in December for the January meeting the DA will shoot it down. In the NY State primary getting people to vote for Bernie is a goal and I can see using every UFT event as an organizing tool for Bernie.]

I wrote this article for the Nov/Dec print edition of Ed Notes, distributed at the Nov UFT Delegate Assembly. (There's also an article on health care reprinted from Under Assault: The public option needs to go on the “ash heap of history".

I'm for Bernie but I also have some doubts - about his program and the way it would be implemented - if at all. 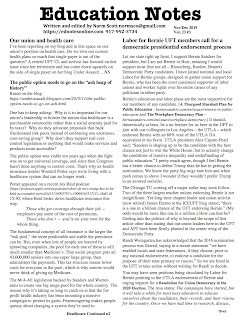 We probably need transformational change but I fear it could as easily go right rather than left if it gets screwed up. Imagine an economic crash under Bernie or any Democrat - and this is what I fear - whatever Dem wins the economy crashes and a competent right winger comes into power.

Anyway, this is about democracy at the UFT over the presidential nomination process and there's a lot of irony in that it is being pushed by people in the MORE Caucus which certainly didn't poll the members when they suspended me and others over trivialities.

But while I still support the idea of any democratic process in the UFT though I wonder why a referendum on this issue over all others? I'd love to see one on class size. I also call into question exactly how democratic the process was in Los Angeles which basically had a Bernie up or down discussion and never went to referendum. I point out that the UFT will never go for a democratic process. Randi will decide and then we will have a series of events to endorse her choice - and that AFT choice will be the UFT choice despite Randi giving locals permission to make their own choices.

And exactly how would this process work in the UFT? And what if Biden get the most support -- what would MORE and Bernie for Labor do? No way they would be bound for Biden. So in some ways this is a way to charge the UFT with not being democratic and try to make some hay out of this in a future electoral campaign. Also an organizing tool to get people to sign the petition and use that list for future contacts and organizing opportunities. But no one ever said MORE was not opportunistic.

By the way - Labor 4 Bernie is having a debate watch tonight at Versa Books, 2 Jay Street in Brooklyn.

Let me state right up front. I support Bernie Sanders for president, but I am not Bernie or Bust, meaning I would support most (but not all – Bloomberg, Booker, Bennet) Democratic Party candidates. I have joined national and local Labor for Bernie groups, designed to gather union support for Bernie, who has been the most consistent supporter of labor unions and worker rights over his entire career of any politician in either party.

Bernie's education and labor plans are the most supportive for our members of any candidate. [A Thurgood Marshall Plan for Public Education - berniesanders.com/en/issues/reinvest-in-public-education and The Workplace Democracy Plan –berniesanders.com/en/issues/workplace-democracy.] It should, theoretically at least, be a no-brainer for us here in the UFT to join with our colleagues in Los Angeles – the UTLA – which endorsed Bernie with an 80% vote of the UTLA DA equivalent in his favor. UTLA president Alex Caputo-Pearl said: “Sanders is shaping up to be the candidate with the best chance not just to win the White House, but to actually change the conditions of massive inequality and underfunding of public education.” I pretty much agree, though I feel Bernie has a better chance to defeat Trump than he has in getting the nomination. We know the party big-wigs hate him and when push comes to shove I wonder if they wouldn’t prefer Trump to an avowed socialist.

The Chicago TU coming off a major strike may soon follow. Two of the three largest teacher unions endorsing Bernie is not insignificant. Yet long-time chapter leader and union activist (now retired) James Eterno at the ICEUFT blog stated, “there is a one in a billion chance of the UFT endorsing Bernie.” (My odds would be more like one in a million.) How can that be? Getting into the politics of why is beyond the scope of this article other than stating that our union leaders here in the UFT and AFT have been firmly planted in the center wing of the Democratic Party.

Randi Weingarten has acknowledged that the 2016 nomination process was flawed, saying in a recent statement “we have enabled locals and state federations, if they choose, prior to any national endorsement, to endorse a candidate for the purpose of their state primary or caucus.” So we are freed in the UFT to take action without waiting for Randi to decide.

You may have seen petitions being circulated by Labor for Bernie pointing to the UTLA endorsement of Bernie and urging support for a Resolution for Union Democracy in the 2020 Election. The reso states: The campaigns have started, but it will take a while for most busy educators to educate ourselves about the candidates, their records, and their visions for the country. Once we have had time to research, discuss, and deliberate, nobody knows better what is best for our union than the members ourselves.

An interesting contrast to what happened in LA where they didn’t wait for people to research or even offer them a choice other than Bernie. Here is their process:
Sept. 11 – UTLA Board of Directors votes 35-1 to begin exploring an endorsement process for Sen. Bernie Sanders.
Sept. 18 – UTLA House of Representatives votes 135-46 to confirm the process to explore endorsing Sanders.
Oct. 2 – School site leaders discuss and review endorsement materials.
Oct. 2 – Nov. 12 — School site leaders engage members on consideration of a UTLA endorsement of Sen. Bernie Sanders.
Nov. 13 –  Membership advisory up or down vote at 9 regional area meetings. 72.5% of voters, representing more than 500 LAUSD schools, say yes to endorsing Sanders.
Nov. 14 — House of Representatives votes 80% to endorse Sen. Bernie Sanders.

The reso for the UFT goes in a very different direction than LA:
Resolved that 1) The UFT will wait to endorse a presidential candidate until after members have had a chance to learn about the candidates through the first six DNC debates through December 2019. 2) The UFT will hold forums for members to discuss the endorsements, and invite as many candidates to speak at such forums as possible. 3) The UFT will decide which candidate to endorse through a citywide, binding, one-member, one-vote poll of our members.

I am trying to parse what a binding one-vote poll of our members might mean for us in the UFT considering the politics of our union leadership and where our own membership might stand with so many candidates (yes, even Trumpers).

So this petition is very different than the process in LA by calling for a referendum of sorts where all members of the UFT would get to vote for their candidate of choice. What if the UFT membership splits along the lines of the candidates with “the winner” getting, say, 25% of the votes. Thus, Bernie or Biden could “win” with a minority of votes. Would that be binding? Or democratic? The process being called for seems flawed, especially coming from a group billed as “Labor for Bernie.” Would a Biden endorsement by a clear minority of voters in the UFT be acceptable when they clearly have a preferred candidate in Bernie? Where do people in your schools stand at this point?

The reso being circulated in the UFT seems to recognize the realities of the control the leadership has over the Exec Bd, the DA and most of the schools, and never mentions Bernie. To go around that process, the sponsors are pushing for chapters to endorse the reso and hope that in schools where they have people, they can come to the DA with some chapter endorsements. The main group pushing this reso in the schools would be the MORE Caucus, whose leadership is prominent in Labor for Bernie.

If a real referendum went against what the UFT leadership or even L4Bwants, that would put both of them in a box. So this reso has zero chance of passing, but putting it forth offers an opportunity to charge the leadership and Unity Caucus with not being democratic. And gathering signatures is an organizing opportunity for MORE. They’re certainly not interested in organizing me. But I will sign it anyway. Calling for democracy is good, I say, with some sense of irony (that’s an inside joke).