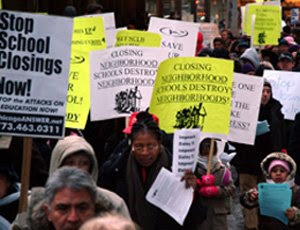 With a severely weakened union, there's a new union caucus in town in Chicago. CORE (Caucus of Rank and File Educators) organized the protest, which is being reported by Labor Notes.

Here's on interesting note in the articlem which I posted on norms notes with links active:

As Chicago’s school district has become increasingly run by private contractors, the 31,000-strong Chicago Teachers Union, an AFT affiliate, has seen its rolls plunge by 6,000.