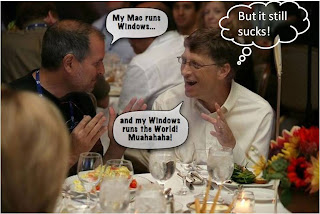 
With the money Microsoft has spent on failed efforts to design hardware, you could finance a trip to Mars. Its failures make up quite a flop parade: WebTV. Spot Watch. Ultimate TV. Ultra Mobile PC. Tablet PC. Smart Display. Portable Media Center. Zune. Kin phone. If this were ancient Greece, you’d wonder what Microsoft had done to annoy the gods.

And then there's this: Office for Mac Isn’t an Improvement

Office 2011 for Mac, the first new version of Microsoft's software suite in several years, is disappointing.

So, isn't this the same guy who is telling everyone how to run the nation's schools? He looks familiar. I think I ran into him hanging out with Randi in Seattle at the AFT convention.
Posted by Norm @ ed notes online at 11:33 PM