Fred Smith with input from the amazing Change the Stake crew, led by Andrea Mata who put on a wonderful event tonight, wrote the statement below. 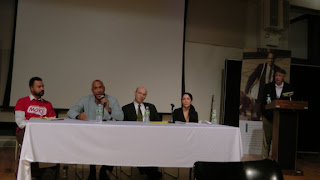 Brian Jones, wearing his MORE shirt, rocks. So did MORE/Change the Stakes' Diane Zavala (below). Pedro Noguera was almost inconsequential and Shael had an answer for everything as he came off looking like a dissident inside Tweed, the role he is assigned to play -- and also maybe part of the underground campaign to have him succeed Walcott when Bloomberg is gone -- you know, the old bait and switch. Send him out there to show reasonableness --- Pedro declared him to be the only reasonable one at Tweed -- just a sham as far as I am concerned -- but you have to see the tapes which I will put up. Juan Gonzalez, just about the only press person real reformers respect (aside from Winerip who the Times makes sure no longer covers ed) moderates. 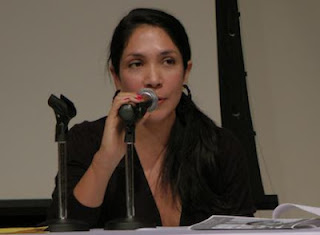 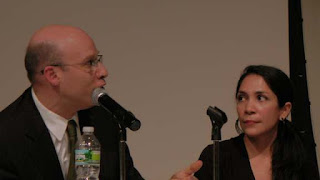 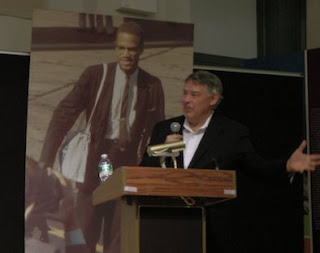 I got there at almost 7PM, an hour late but the panel had just started. I missed the beginning but Jaissal Noor was there to tape. Wait for his which is professionally done -- I will put up snippets.

Why Change the Stakes?

Change the Stakes is a group of parents and educators who want the best education for all children.  We are a work in progress and about progress for the entire New York public school system.
We are a growing group concerned with the harm high stakes-testing is doing to our children and schools.  We oppose an over-emphasis on tests and misuse of the results for purposes they were never intended to serve. We believe high-stakes testing must be replaced by valid forms of student, teacher, and school assessment.

We are asking parents and community members like you from districts across the city to join hands to improve teaching and learning opportunities for all children.  We believe a good education is the right of every child and a right that every parent should demand.  It must never become a matter of luck, lottery or good fortune.  And good education is not something that can be measured by a test score.

What is High Stakes Testing?

We strongly reject the way multiple-choice tests are hurting our children and denying them high-quality teaching in a healthy atmosphere that fosters the full development of their capabilities.
The Department of Education and the State Education Department have made testing a substitute for education. Testing has come to dominate school activity, dimming children’s natural enthusiasm for learning.  It has made 8-year olds anxious about what could happen if they don’t do well on the tests.

So much time is spent preparing students to take the annual statewide exams, field tests and an endless number of other tests that history, music, art and gym have been squeezed out of the school day.

Testing has been used to bully teachers, turning them into drill instructors who must follow stifling classroom routines to generate high test scores.  It has made teachers fear for their jobs, knowing they will be rated ineffective if their students don’t do well on unreliable exams.  It has made them compete against each other in an effort to survive, rather than work cooperatively.

And it has forced principals to intensify pressure to produce good-looking results, no matter what, because they are being threatened with the reorganization or possible closure of their schools if they fail to do so. Where high stakes tests are the rule, it is no surprise that cheating has often followed.
These different forms of punishment inflicted upon the public school system by high stakes testing have been called accountability.  The end result has been to create hundreds and hundreds of elementary and middle schools in which disruption and instability are the norm.

Students, teachers and principals are held accountable, but the low quality of the tests themselves is never accounted for.

Still there is another equally troubling and unacceptable aspect of all the testing.  As more and more testing has been piled on every child—parents have been left out of the discussion.

We are offended by the lack of respect shown to parents who have been kept in the dark by the DOE and SED about all the testing that is taking place and we demand immediate and specific answers to basic questions.  We are entitled to a complete test inventory—a matter of accountability on the part of the city and state officials responsible for approving, organizing and implementing the various testing programs.

To break down the information for us in an understandable way, we need to know about the testing that is being conducted this year (July 1, 2012 to June 30, 2013) on a grade by grade basis from K-12:
How many professionally designed and developed tests are being given in New York schools? What is the purpose of each?  When are they scheduled to be given?  How much time is spent administering each test?  How many students and schools are involved?  And how much money does each test cost (the material, the scoring and the reports)?

Which publisher constructed or supplied each exam?  Who owns the exams we are paying for?  Which ones are field tests—tests and questions that do not count but enable commercial publishers to develop and sell exams for future use? Which exams are used to screen children for entry into special programs or selective schools?  Which must be passed as a basis for promotion or to fulfill graduation requirements?  Surely, the city and state know and can give us these details for the current year.

What Else We Believe and What Parents Must Know:

Change the Stakes believes in sunshine laws and the absolute right of parents to know what is happening to their children in school.  We believe parents must have a real voice in the life of their schools. We see efforts to keep parents uninformed as a way to prevent opposition to questionable policies, programs and weak test instruments and a sure sign that those running the school system have little regard for us.

We wonder when the state will make the 2012 ELA and math exams available.  In the past, parents and interested parties could see the actual items online—the items that counted and would not be used again. Thus far, SED has withheld the information.

We believe in sound alternatives to the continued use of statewide multiple-choice and short answer exams, which lack reliability and, therefore, lead to invalid decisions about students, teachers, schools.

We demand that the state set forth a policy on how alternative assessments of performance shall be carried out this year to meet agreed upon standards.  A clear statement is required explaining how projects and portfolios will be used as measures of achievement and growth.  It must reflect high expectations for all children and specify the kind of work and behavior students will be evaluated on to provide relevant evidence of learning and ability.

It is imperative that parents who choose not to have their children participate in the April 2013 state exams know in advance what the alternate assessment procedures will entail. We are tired of hearing that the state offers no opt-out provision or that the sky will fall if parents object to marching along with test-driven education. Other large states have processes recognizing the legitimate conscientious choice parents/guardians have made to protect their children from harmful testing programs.

Guidelines for parents and teachers should be issued by SED spelling out the methods to be followed, the teacher training to be given and the criteria that will be applied uniformly to assess the progress of the opt-out children. We insist that the guidelines direct principals to provide meaningful educational activities to children who do not take the 2013 exams. Missing school or sitting in an office are not an option.  Principals need to be cautioned that parents requesting to keep their children out of the exams should not be harassed nor have their children mistreated at school in any way.

We demand a statewide directive that requires timely parent notification about all field testing programs and creates a mechanism that allows us to say “NO” to this extra burden and the use of children as subjects in test research projects.  We strongly believe that insinuating children into test development projects without informed parental consent is a violation of parent and student rights.
We were shocked to learn that our schools gave field tests last month in reading, math and science without letting parents know. ACT and Pearson bought entry into schools by offering principals I-Pods in return for student participation—behind the backs of parents. We view this as a bribe and an end run that lets publishers exploit children and take away more school time to try out test material.
We want written, legally binding assurances from the state and city that they will not engage in or enter agreements that allow any entities to use individual information about students or to distribute such data to third parties without the knowledge and consent of parents or guardians. We believe the right to privacy is fundamental and must be protected and we demand harsh punishment of any party who violates these restrictions.

We know that the state’s testing program flows from the national No Child Left Behind Act, which was originally intended to help the most vulnerable students.  Instead, NCLB’s testing requirements are now widely acknowledged to have placed severe stress on English Language Learners (ELLs) and children with special needs.  As parents, along with teachers, guidance counselors and child psychologists, we know firsthand the kind of frustration and struggle the tests put such children through. To what end?  We believe that federal policies and practices with regard to these student populations, which are largest in urban areas, need to be overhauled.

Finally, many Black and Hispanic parents have felt arguably that testing was fairer to their children than leaving decisions about them to unsympathetic, disparaging or biased teachers and principals. Over the last decade, however,—the era of high stakes testing—despite all the exams, the achievement gap has closed little or none for these students.  We cannot fix one set of problems with ineffective solutions dressed in the cloak of reform.

And the way the results have been distorted over time has left high school students from poor economic households, deficient in reading and math, unprepared to find other than low-level jobs and, should they graduate, unready to do college level work.  All of the testing has added no benefit or value whatsoever to the populations NCLB promised to help.

The need to change the stakes cuts across all lines. Parents should never forget: We are the schools!

Please join us by signing in and giving your email address or phone number.  You may also follow us at www.changethestakes.org.  We look forward to working together with you and other parents in your school or community to build a better