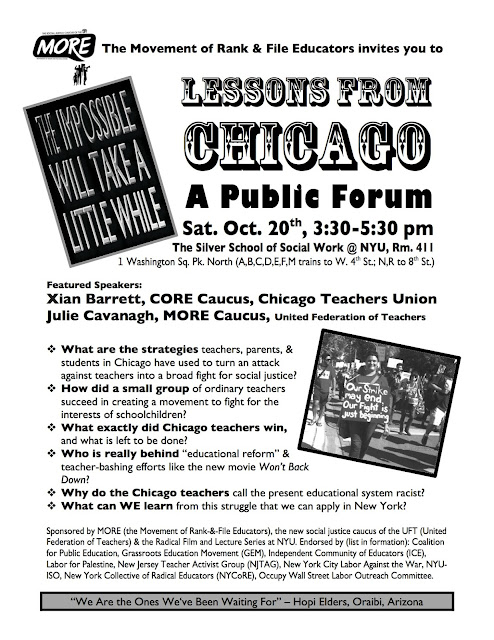 Don't miss the chance to see Julie and Xian today. I met both of them in the summer of 2009, Xian in Los Angeles at a 5-city gathering of union activists where Xian and 5 others came from Chicago's CORE and Julie here at the first meeting of GEM and CAPE. I don't have to tell ed notes readers about Julie. Even if you can't make it, check out these 2 videos I shot of Xian to get an idea of how CORE began in mid-2008 as an 8 person group reading Naomi Klein to a take-over of the Chicago TU two years later.

One aspect of today's event is that people who organize this are thinking about broader lessons for us here as you can see in the leaflet MORE handed out at the DA (see below). I think there should also be emphasis on the organizing challenges that CORE overcame -- including crafting political message -- something MORE hasn't quite nailed yet. I do know that CORE had a year and a half to build themselves organizationally before facing an election while MORE is hustling to get organizational tools in place while prepping for the elections this spring. The amount of meeting time needed is stressful to working classroom teachers. My advice is to do less if needed rather than burn out. But who listens to me?

I do listen to Xian and others in CORE very carefully to see what we can learn and adapt here in NYC. I admit, I am often stumped but will listen carefully again today and maybe ask a question or two.

Here are 2 videos I shot of Xian at SOS in Washington this past summer.

The first is of a panel -- and it includes an interesting comment from Leo Casey near the end as the UFT/AFT crew tries to show how Chicago is so different from everyone else. (At the DA Mulgrew spent some time differentiating us -- I really want to get more details on what he said.) Unfortunately, I had to change batteries and lost some important points Xian made. Later that afternoon I taped an interview with Xian done by Jaisal Noor which is more comprehensive. Both vids are around 18 minutes.

Here is the announcement on the MORE web site.

Lessons from the Chicago Teachers’ Strike
A Public Forum 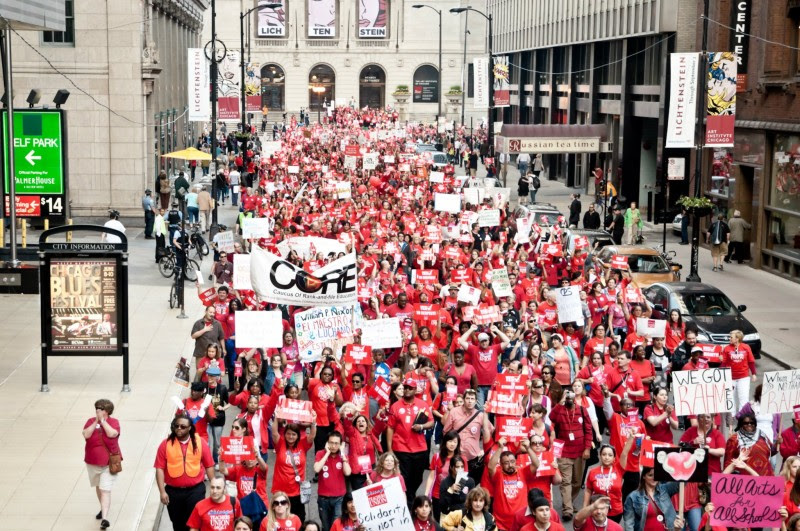 Saturday, October 20 at 3:30pm
The Silver School of Social Work at NYU
Room 411
1 Washington Square Park North
(A,B,C,D,E,F,M trains to W. 4th St.; N,R to 8th St.)
Featured Speakers:
Xian Barrett, member of the Chicago Teachers Union and the Caucus of Rank and File Educators (CORE)
Julie Cavanagh, member of the Movement of Rank and File Educators (MORE) and the United Federation of Teachers
What are the strategies teachers, parents, & students in Chicago have used to turn an attack against teachers into a broad fight for social justice?
Who is really behind “educational reform” & teacher- bashing efforts like the new movie Won’t Back Down?
How did a small group of ordinary teachers succeed  in creating a movement to fight for the interests of  schoolchildren?
Why do the Chicago teachers call the present educational system racist?
What can we learn from this struggle in New York?
For more on both speakers, please see:
Xian Barrett"Why I’m Striking" –http://chiteacherx.blogspot.com/2012/09/why-im-striking-jcb.html
Video from SOS12: Teachers’ Unions, Teachers’ Rights, Teachers’ Voice:http://ednotesonline.blogspot.com/2012/08/video-from-sos12-teachers-unions.html
Julie Cavanagh on MSNBC’s UP with Chris Hayes –http://www.msnbc.msn.com/id/46979738/vp/49051313#49051032
Sponsored by: MORE (Movement of Rank and File Educators) & the Radical Film and Lecture Series at NYU
Endorsed by (list in formation): Coalition for Public Education, New York Collective of Radical Educators (NYCoRE), Grassroots Education Movement (GEM), Independent Community of Educators (ICE), NYU International Socialist Organization (NYU-ISO), Labor for Palestine, New York City Labor against the War, OWS Labor Outreach Committee, New Jersey Teacher Activist Group (NJTAG), Labor Notes
For more information or to endorse the meeting, please contact nycctusolidarity
Lessons from Chicago citiwide flyer-3.pdf

-------
And here is the MORE leaflet from the DA. Note the lesson of democracy in the union. I would include democracy in the caucus running the union, which is key. Comparing CORE to Unity would certainly be instructive.