Imagine if a teacher did what Linda Hill, who persecuted Francesco Portelos mercilessly, did --- double dipped and was caught red-handed! But just as important is the game the Post is playing here.

Linda Hill channels Captain Queeg
I was at the hearing to hear Hill's bizarre - paranoid testimony against Portelos in which she accused him of racism and anti-semitism (she is black and Jewish). My hearing notes (below) have a bunch of references to her Captain Queeg moments where I expected her to start rolling steel balls. (SEE BOGART VIDEO: https://www.youtube.com/watch?v=-95QqBXLG2I#t=26)

If you read my unedited notes you will see some steel balls and Queeg references. She lied openly at times at the hearing -- which should have lead to her being brought up on charges on those issues alone. But none of the people who lie in their testimony against a teacher have anything to worry about when it comes to DOE legal. She claimed she had fear of Portelos -- his lawyer asked her if she did why didn't she ask for protection? Duh!

It's nice to see NY Post ed hitwoman Susan Edelman taking shots at principals instead of just teachers (http://nypost.com/2015/02/22/farina-principal-pal-gets-free-pass-after-ripping-off-taxpayers/). I remember Edelman doing a story on Portelos at the beginning of his troubles in March 2012 on the Sunday of our robotics tournament. Portelos was there as coach of his team and showed me the piece. I called Edelman up in outrage and told how come the Post wasn't taking a photo of him giving up his Sunday for the kids. She said she would send a photographer but never did.

Full disclosure - I've known Sue for many years as her aunt was my long-time next door neighbor. On the whole I like her, given she is from the Post. Her Sunday features expose corruption in the DOE.


"It pays to be the chancellor’s pet. Principal Linda Hill of IS 49 in Staten Island was caught red-handed ripping off taxpayers in 2013 — after years of double dipping into overtime funds. But Chancellor Carmen Fariña — Hill’s mentor when she became principal — has yet to discipline Hill or even require her to pay the money back. Hill admitted she collected simultaneous overtime on multiple occasions for attending IS 49’s School Leadership Team meetings and for supervising an after-school program."

What a crock. Hill did this under BloomCott and Portelos revealed this information publicly while Farina was retired taking care of her grandkids.

But we know why this story was published -- another chance for the Post to take a shot at Farina and de Blasio. Fact is Hill comes out of the Bloomberg admin and everyone knows she was not capable of running that school --- sources from top levels confirms that -- and to blame only Farina for protecting Hill for many years is a major distortion of reality. Sue plays the Post political agenda to keep her job. 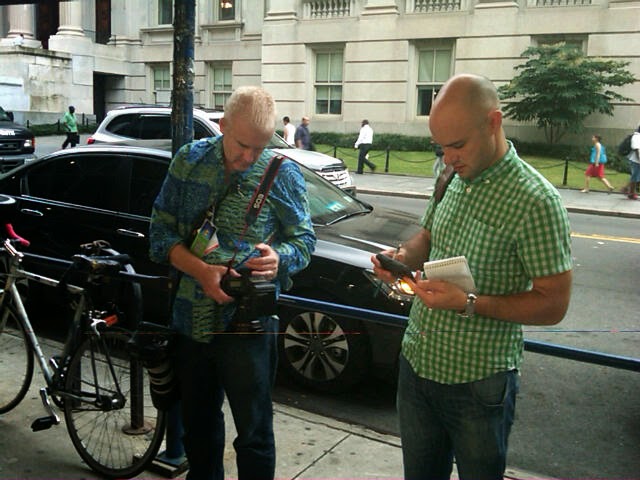 And the NY Post sent a hitman reporter and photographer to the first morning of the hearing to write an anti-Portelos story (More mischief from ‘rubber room’ teacher) based on the DOE Legal opening statement alone -- see my report: Portelos Hearing: NY Post Reporter Reuven Fenton C..Commits Journalistic Malpractice..
Here are more reports of those early hearing days.
My Hearing notes Sept. 23 and Sept 30, 2013
Notes on Hill testimony at Portelos hearing - you'll have to decipher them - Portelos has the transcript. (I didn't have my computer on Sept 12). My comments in brackets and bold.
DOE legal is the awful Jordanna Schenkman.
Portelos rep is the great NYSUT lawyer Chris Callagy.